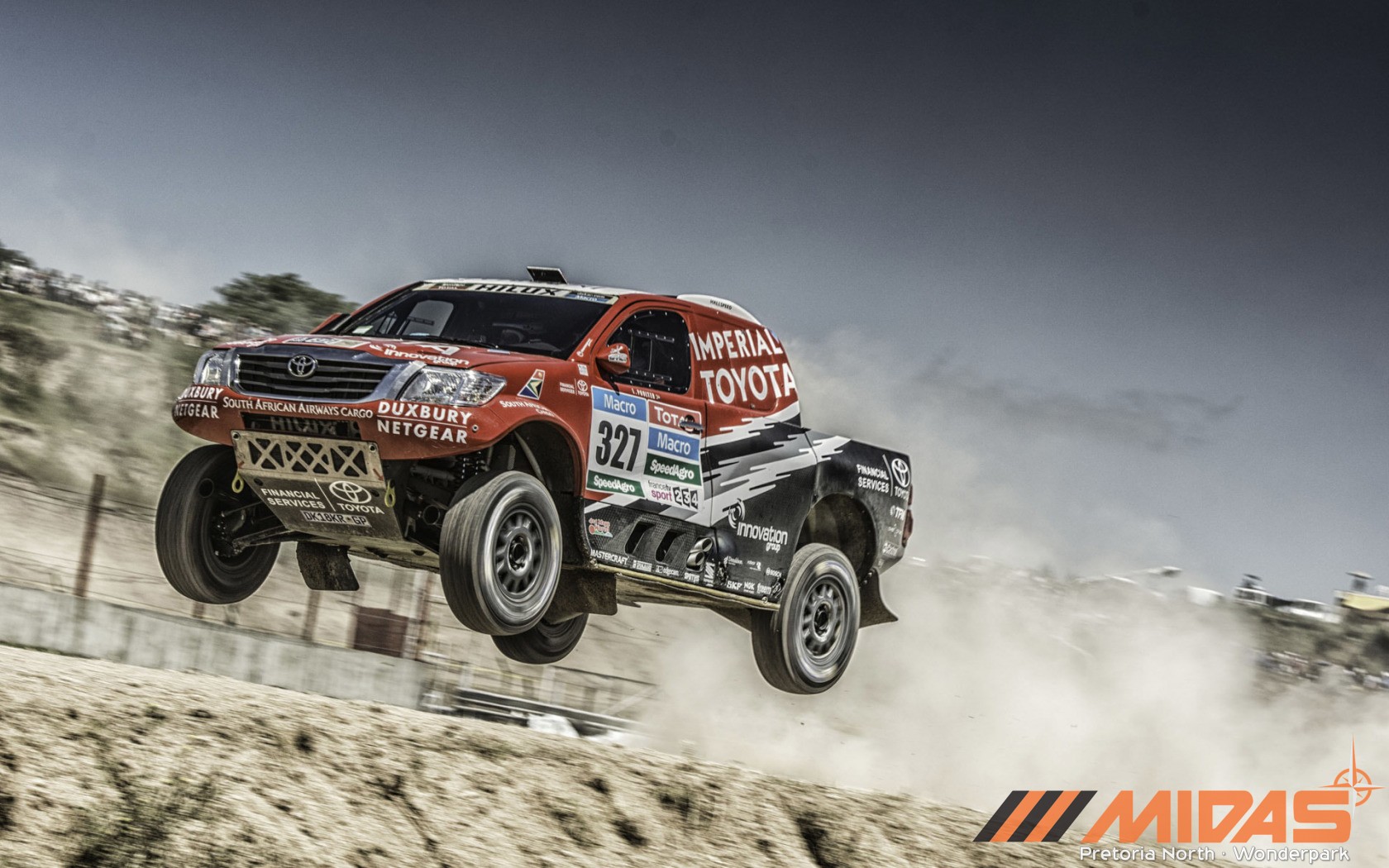 Find out how to cover long distances off road at high speed and live to tell the tale with our A-to-Z guide to the toughest rally raid event of them all.

Rally raid, also known as marathon or cross-country rallying, is a multiple-day challenge for motorsports athletes on two or four wheels. It’s the perfect blend of racing and adventure, consistency and improvisation, athleticism and driving skill.The Dakar Rally is the sport’s ultimate event – and it’s where even the elite members of the world’s top teams are stretched to the limit. Check out our A-to-Z guide that details everything you need to know about the annual event.

A is for Africa

Africa will always be the spiritual home of cross-country rallying, even if the prestigious Dakar Rally has been held in South America since 2009. There are still several smaller races that take place on the continent, such as the Rally of Morocco and the Africa Eco Race, which retraces the original route. But that will have to do: for political and economic reasons, it looks unlikely that the Dakar will return to Africa.

B is for bivouac

Drivers, co-drivers, mechanics, engineers, strategists, journalists, photographers, doctors, cooks, timekeepers and everyone else in the retinue sleep, live and interact in a tent city. It’s set up every evening and then disappears again in the morning – kitchens, toilets, showers, medical unit, media centre and all.

C is for Coma

Spanish driver Marc Coma has five Dakar bike wins to his name and, for a whole decade, was only seriously challenged by French racer Cyril Despres. Coma retired from the sport two years ago and since then he’s been in charge of planning the route through South America. He knows how to combine sport and spectacle with security.

D is for Dakar

Senegal’s capital city was the original destination of the rally adventure, which was launched in Paris in December 1978. Until the whole thing decamped to South America in 2009 for security reasons, the Dakar failed to include the city on just two occasions.

E is for elements

Rally raid drivers have two forces of nature to contend with in addition to negotiating the sand and gravel. Torrential rainfall can turn a route into a mud bath in minutes. On mountain passes more than 4,000m above sea level, the altitude means a driver’s lungs need to work as hard as the engines.

F is for finish line

Unlike in the WRC, in rally raid only the drivers who make it to the finish score points. So the competitors do everything within their power to somehow drag themselves to the end, even if they’ve had serious accidents. What would usually take seconds can stretch to minutes – and often hours.

G is for GPS points

The finish line isn’t your only goal. On every stage, there are a number of specific points that drivers must locate and pass within a certain minimum distance – usually a few metres. Otherwise they face point penalties or disqualification.

H is for hydration

Drivers take on up to five litres of liquid during the special stages alone: the physical exertion, sun and – more than anything else – altitude in South America can create huge problems for the body. Rally raid is an extreme sport, whatever you may be driving.

All vehicles are fitted with a tracking system that uses iridium technology to ensure no driver gets lost. It can accurately pinpoint a vehicle’s position, even in areas with no mobile reception. Iritrack also serves as an emergency detector that can record speed at any point and send it back to the Dakar headquarters in Paris in real time.

J is for Jutta

German driver Jutta Kleinschmidt is still the only woman to have won the Dakar Rally. Her victory came in 2001, for Mitsubishi. Kleinschmidt’s fiercest rival at the time was her then-boyfriend, Jean-Louis Schlesser.

K is for KTM

The motorbike manufacturer’s 16 victories in the Dakar Rally make them the most successful team in the history of the race, and they haven’t been beaten since 2001. Russian truck maker KAMAZ are up to 14 wins and Japanese team Mitsubishi have 12 titles.

L is for liaison

Between the special stages of the rally are liaison stages, which take drivers through regular traffic for sometimes hundreds of kilometres a day. For these routes, there’s a strict speed limit that’s monitored via GPS and every breach is penalised with a large fine.

M is for multi-disciplined

The four disciplines of the Dakar Rally are cars, trucks, motorbikes and UTV, which stands for utility terrain vehicle (more on those later). But you’ll only find true offroad vehicles rather than modified on-road vehicles in this event due to the extremely tough nature of the terrain. To date, only three drivers have succeeded in winning the Dakar both in a car and on a bike: Stéphane Peterhansel, Hubert Auriol and Nani Roma. Peugeot factory driver Cyril Despres, a five-time winner on his bike, has what it takes to become number four on the list.

N is for needing help

If a competitor suffers a serious crash, their fellow drivers are obliged to come to their aid. Once the emergency beacon has been deployed, the first responders leap into action and the driver – now out of the competition – is rescued, usually by helicopter. Those who provide first aid are credited for their lost time.

O is for orientation

Alongside “How fast can I go?”, “Where am I going?” is the decisive factor when it comes to rally raid success. The drivers have three things to help them: their roadbook, GPS and a good old-fashioned compass.

P is for Peterhansel

They call him ‘Mr Dakar’: Frenchman Stéphane Peterhansel has won the race six times on a bike and seven in a car. The reigning title-holder will be the hot favourite again for 2018. His toughest opponents are Peugeot team-mates Carlos Sainz, Sébastien Loeb and Cyril Despres.

Q is for quads

These four-wheeled mini-vehicles, also known as ATVs, have been in the Dakar starting line-up since 2009. Argentina’s Marcos Patronelli holds the record for the most wins, with three.

R is for roadbook

This is a scroll of paper or a book showing all the turn-offs, danger points etc along the route. Swotting up with the roadbook the night before a race is important. Experienced drivers use fluorescent markers to keep track of their route at a glance if they come under pressure.

S is for Silk Way Rally

This two-week event is viewed as the mini-Dakar. The last two car races were won by Cyril Despres in a Peugeot. In the truck category, KAMAZ are unbeaten since 2012. Bikes don’t participate in this competition.

T is for Tatarstan

The dominant vehicles on the rally raid scene come from the city of Naberezhnye Chelny in Tatarstan, a three-hour flight from Moscow. The drivers on the KAMAZ Trucks team are regular staff at the vehicle plant and work as mechanics or engineers when they’re not winning races.

U is for UTV

The UTV (utility terrain vehicle) is the cheapest route into the world of rally raid for amateurs, who make up around 80 percent of Dakar entries. Standard buggies with barely 100hp and rear-wheel drive won’t set you back much more than €27,000 (US$24,000). The 2017 winners of the UTV category were Brazil’s Leandro Torres and Lourival Roldan.

V is for Volkswagen

The dark-blue Race Touareg was the first vehicle to demonstrate that you could dominate rally raid with a diesel engine; in 2010 and 2011, VW scored a 1-2-3 finish in the Dakar – and then retired from the sport.

W is for World Cup

The World Cup covers 11 events of differing lengths and on different terrains. The current overall champion is Qatar’s Nasser Al-Attiyah in a Toyota.

X is for X-Raid

The German team that goes by the name of X-Raid was founded in 2002 and made its Dakar Rally debut in 2003 with a BMW X5 CC. These days their drivers use vMINI All4 Racing vehicles, but they’re best known for scoring big in four consecutive editions of the Dakar from 2012, with Stéphane Peterhansel, Nani Roma and Nasser Al-Attiyah all driving X-Raid to victory.

Y is for youngsters

Events in Europe and Dubai are ideal for up-and-coming young motorsports stars. Morocco, Qatar and Kazakhstan are good for those wanting to take the next step up.

Patrick Zaniroli is a one-time Race Director of the Dakar Rally and won the event in the car class back in 1985 for the Mitsubishi team. He was responsible for mapping the route across the treacherous terrain of North Africa and he went on to set up the Trans Africa, a vintage car rally that follows the old Paris to Dakar route.